For all you fashion lovers out there, the big event that is currently taking place (since last Thursday and until this Thursday) is New York Fashion Week for Fall/Winter 2011.  Actually, it’s sponsored by Mercedes-Benz so the official event title since 2009 is Mercedes-Benz Fashion Week.

Twice a year, an assemblage of the who’s who from the media and fashion worlds converge to Lincoln Center to see the latest collections of designers such as Tommy Hilfiger, Nicole Miller, and Christian Siriano (Project Runway winner) among others, including my favorites like Tory Burch and Monique Lhuillier (a fellow Filipina).

Since last Fall (when they showcased this year’s Spring collection), shows have been at Lincoln Center (vs. Bryant Park, the original venue when this all started in 1993).  I haven’t been to any shows since they’ve moved it to the new venue but I can imagine that the shows themselves are still a gorgeous spectacle of imagery, ridiculously beautiful (and frankly, just not fair) models, and of course, amazing clothing and designs.

I’ve been fortunate to have been able to attend many of the shows, especially when I used to live in New York, but alas, this year I’ve only been able to watch the livestreams online.  The last one I attended was in September 2008 for Yigal Azrouel’s Spring collection (I luckily happened to be in New York for work that week).  Thanks to a dear friend who is a close friend with Kelly Cutrone from People’s Revolution (who gained fame on the MTV show The Hills), I scored a front row seat for this show, literally next to home designer Nate Berkus, Katie Lee (who ironically separated from Billy Joel because of rumors she was having an affair with Yigal Azrouel), and Nigel Barker and Miss J Alexander from America’s Next Top Model.  Oh, good times indeed.

This reminds me that I never did do my write-up on the Anna Wintour documentary, “The September Issue” as I had promised.  So, here it is now: In a nutshell, Anna Wintour is queen of the fashion world.  And, this week is no exception.

My favorites include Band of Outsiders (L) and Alice + Olivia ®.  Blurry photo of me in the middle from the Yigal Azrouel show. 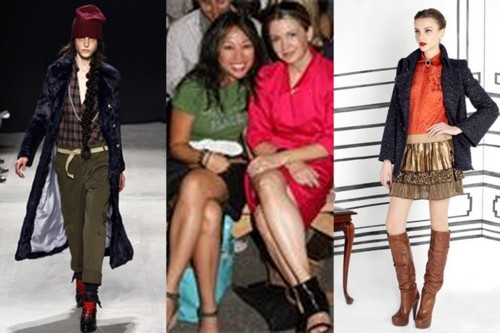