My favorite new show is “The Voice” which premiered last week and airs Tuesday nights on NBC.  If you haven’t heard anything about the show yet, Christina Aguilera is one of the voice “coaches,” along with Maroon 5 rocker Adam Levine, singer Cee Lo Green and 2010 CMA Male Vocalist of the Year, Blake Shelton.  Hosted by Carson Daly, the concept behind the show is that the “coaches” have to pick their singing “team” of 8 solely from the sound of their voice (their backs are turned so they cannot see what the contestants look like, what they’re wearing, how old they are, etc.)  It is only THE VOICE that will determine whether or not they’ve got the potential to win a recording contract.

I love it!  The four coaches clearly bring lots of experience to the show’s format, and they have a great rapport and friendly competition among them to vie for the perfect team to mentor.

The people who pass the blind auditions are then “coached” by either Christina, Adam, Cee Lo or Blake, who may even perform with them as their contestants move through the weekly rounds of elimination. The winner gets $100,000 and a recording contract.

I’m not quite sure which coach I’m voting for yet! Team Adam, Team Xtina, Team Blake or Team CeeLo??? Time will tell!  Does anyone have favorites yet? 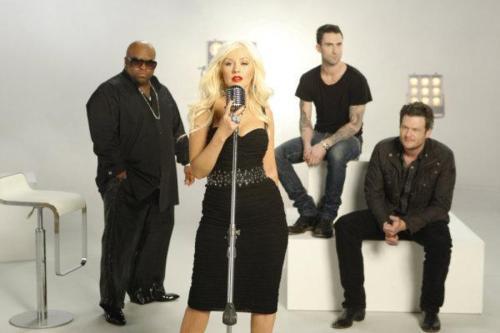