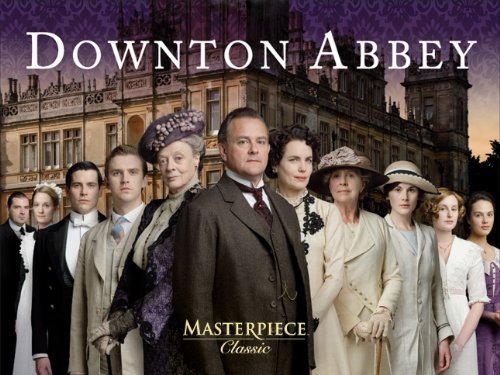 Blame it on my dear friends Chris and Jeff, who turned me on to Downton Abbey, but I am now obsessed and this is seriously my new favorite TV drama.

I have been busy catching up before Season 3 returns to PBS in January 2013, and I cannot get enough of this period drama. It is so good! The dialogue and writing is amazing. No wonder it has won a ton of accolades and awards, including this year’s Golden Globe for Best Miniseries or Television Film and last year’s Emmy for Outstanding Miniseries or Movie.

Just a quick synopsis of the show’s premise if you haven’t yet heard of it: Downton Abbey is a British/American television series, set on the fictional estate of Downton Abbey, the Yorkshire country house of the Earl and Countess of Grantham. It has an upstairs/downstairs plot and follows the lives of the aristocratic Crawley family, as well as their servants. It’s a period drama and set around the early-mid 1900s.

Anyway, I’m practically caught up, and have only 2 more episodes of Season 2 to watch, but I particularly loved Lady Mary’s quote from Season 2 Episode 6, which I just watched (Just to give you some background, Ethel is a housemaid who had a bastard child with an officer who refused to acknowledge him):

“The truth is, Ethel’s made her choice and now she’s stuck with it.” – Lady Mary

“Does it? Aren’t all of us stuck with the choices we make?” – Lady Mary

I personally love Lady Mary, despite what appears to be her coldness. For some reason, that quote/dialogue really stuck with me and I felt the need to write about it. Because she’s right – we are stuck with the choices we make. Our lives are where we are because of our own choices, whether we want to believe it or not. I believe it is also up to us (and hence our choices) to change our circumstances if we wish.

So, there it is… witty, insightful writing and a beautifully directed series. I seriously recommend you catch up, too! Let me know if you’re faithfully watching already, your favorite characters, and why. I’d love to hear about it!