Maryland/Washington, DC-based transatlantic rock band Saffron Holiday just recently launched their debut EP, Hands are Gone. They will be performing at The Rock and Roll Hotel in Washington DC, on May 26th, opening for The XOs and Today The Moon.

I’m a huge fan of their sound, and knowing a few of them personally, am in ridiculous awe of their musical talent.  In lieu of all their busy schedules, I’m excited that the band, who are: Lawrence Liu (guitar, vocals), Eric Lee (piano, synthesisers, vocals), Cezar Lopez (bass), and Michael Scherzer (drums, percussion, backup vocals) took a breather to answer a few questions and introduce their original music to you.  Check it out here! 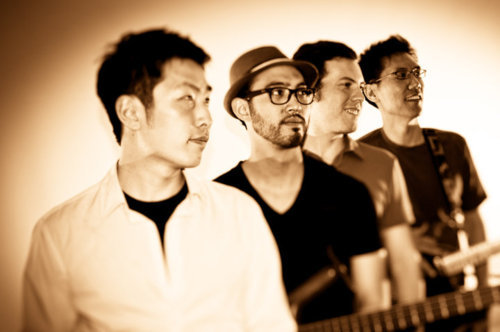 Tell us about Saffron Holiday and its history and start.  When did the band form?

Cezar:  Lawrence and I did some volunteer work together in 2007 but we never discussed music.  In the summer of 2009 we were both looking to create music again.  A mutual friend suggested that we look each other up and later that weekend we ran into each other at the DC Artomatic.  We jokingly vowed to start a band and play at Artomatic the next year.  We’ve been playing music together nearly every weekend since the summer of 2009.

Eric: Around October 2009, there was an exploratory jam between Lawrence and Cezar, who had already been playing together for a while, and me.  After writing a few songs, a mutual friend introduced the three of us to Michael, under the circumstances of covering the Smiths’ “There Is A Light That Never Goes Out”. We never covered it as a quartet, but we did eat good dim sum talking about covering it.  We became the full quartet in March 2010, and our band name was made official in May 2010.

Michael:  We spent our first day as a full ensemble practicing a few songs that Eric and Lawrence had written.  We figured out very quickly that we had something that would work. Before we met in-person, I had previously collaborated with Eric, Cezar and Lawrence via email. They had sent me several tracks they’d recorded using a digital voice recorder.  I added some beats to Chelsea and Oxidation that I recorded using my electronic drum set and Garage Band and emailed it back in response.  Those recordings are very rough, but they served as a launch point for us.

Lawrence: Some interesting tibdits about the band. We’re from all over – I’m a native Texan, Michael’s from Arizona, Cezar’s a Silver Spring, MD native, and Eric is a Londoner. I decided to chase my musical dream and to talk about it with as many people as possible and that’s how I met Cezar who just so happened to be similarly inspired. We looked high and low for bandmates – first playing in a blue-grass, more acoustic combo, and then asking friends, posting want ads on Craiglist and music schools. In the end it was part luck and part our willingness to talk about our musical idea every time we were out. Eric we met at a party. Michael, through a friend. The four of us were bandmates first, but have now become really good friends.

What kind of music do you play?  Any similarities to another band’s sound?

Eric: Our sound is still evolving, but we might call it “transatlantic rock”, a sonic profile which is an organic fusion of electronic-acoustic, with musical influences ranging from 80s pop and rock, to 50s modal jazz. Our lyrics, and the themes we have explored so far, tend to be about people and places, through time and space. Some bands we’ve been compared to include Phoenix, the Smiths and the Cure, Coldplay.

Lawrence: People say we have an 80s sound, I think because of our vocal chorus melodies and the synth. I really think it’s an evolving reflection of our diverse influences, from Brit-pop, to jazz, to current indie and 80s synth pop. My theory is that this is reflective of our generation (20-to 30-somethings) and the natural outgrowth of our being exposed to this stuff during our musical formative years (junior high school, high school). Think before there was the Shins, there was Violent Femmes.

Name some of the venues where you’ve performed.

Eric: Our largest audience was probably at the Fete de la Musique at the French Embassy inGeorgetown, June 2010. We’ve closed out Sulu DC, at Artisphere in Rosslyn, VA; by the way, Sulu DC is an artist showcase focusing on Asian Pacific-Islander American artists, founded and run by our friend and supporter, Jenny Lares. Other venues include Bloombars, the community-focused arts and music space in Columbia Heights and Joe Squared in Baltimore. We played Jammin Java in Vienna, VA on April 18th, and looking to book other gigs in the DC-MD-VA area, as well as some possible leads in NYC.

Lawrence: We also played a baby shower for one of my colleagues!

What are you working on at the moment (details on the latest release)?

Eric: The first year of Saffron Holiday’s life involved birthing an artistic vision for this project, given all of our diverse musical tastes and skills. Once this started forming, and we amassed about eight or nine original songs, and adapted them as we performed more and more gigs, we wanted to record so that we could refine the sound and share it in somewhat permanent form with friends and fans. So we spent a weekend in a cabin in the forest near Berkeley Springs in West Virginia, doing a self-produced recording of our debut four-track EP.   Amazingly, our EP was picked up by Eric Weiner at the NYC-based music blog The Wild Honey Pie, who had kind words to say about our track “Chelsea.”

Lawrence: We actually drew up a time line and list of benchmarks for 2011. We released our EP close to when we actually said we would, and now we’re at the point where we are in writing and creative mode. It takes a lot work to prepare for gigs and to record, and so it’s great to have some breathing room to just be creative.

What do you see the band doing five years from now?

Eric: We’ve been talking about doing improvisational comedy.
Cezar:  That’s funny and true. We’ve also talked about creating a community of artists and collaborators, but the details haven’t been determined yet. I hope to be doing what I’m doing now but to be even better.  I hope that we will be doing what we love and are passionate about – musically, professionally, and more.

Lawrence: I’m hoping we will be able to look back on this great library of music we’ve created and a community of folks around the country and world who have been touched by it. That and having one of our songs featured on a TV sitcom, something dramatic like Parenthood.

When and what made you want to pursue music as a “career”?

Eric: I finally managed to write a whole song, sometime in 2008, while living in Beijing, China. Everything before this was only snippets of lyrics, chord progressions, stranded melodies. I kept working at it, chipping away at what didn’t work, and a song finally came together. That song was “Missed the Train”. That gave me the confidence to continue songwriting more seriously, and here we are today having recorded this track for our debut EP!

Cezar:  I don’t want music to be a “career” for me.  But I do want to pursue music for a long time.  A friend once asked me to describe a perfect day and I said that it entailed exercising, thinking about and working to solve problems, learning something new, eating well, making music, and hanging with and appreciating loved ones.  So I want to do it all–not just music–everyday.  I remain committed to listening to, creating, and studying music.

Lawrence: In 2008, I started seeing a life coach – I know, super cheesy – but actually very helpful. I originally wanted to talk about making a career change, but she noticed that all I could talk about was music. So she encouraged me to take small, but concrete steps to test the waters – playing my sister’s wedding, then a cousin’s wedding, getting a paying solo gig during the lunch hour at a sandwich shop playing cover songs. But my goal was always to be in a band and it’s amazing to think that I got what I wished for. I still have a day job and am too risk averse to drop everything and do this full-time or, say, go to the Berklee College of Music (although I’ve checked out the course catalog), but my dream would be that this becomes a more significant part of my life.

Where do you get your inspiration from?

Michael:  So many sources.  As a drummer, my main influences are the great instructors I’ve had over the years … and Levon Helm (most famously of The Band).  As for general musical influences, there are too many to name here, but I listen to oldies, classic rock, folk, jazz, and indie.

Cezar:  So many sources, as well.  I wanted to be in a band when I saw seniors from my high school performing covers of “Melissa” by the Allman Brothers and “Green Onions” by Booker T & the MGs.

Lawrence: Walking home late at night by myself from a bar or party. I like walking.

What would you say is the band’s most important accomplishment?

Michael:  Our EP is our most tangible accomplishment.  It’s really the culmination of many months of practicing, developing, performing, and recording.  We put a lot into this, with the help of our friends.  We’re excited to share it with everyone.

Eric:  In Silver Spring, Siriwan, a Thai restaurant.  In DC, Five Guys or our friend Josh Wu’s Toki Underground. I like Hank’s Oyster Bar, too.  In London, I usually eat at home, but Ottolenghi does an amazing passion fruit meringue.  In NYC, I recently enjoyed dining at Prune and Xi’an Famous Foods.

Cezar:  I like whatever Lawrence is wearing.  I don’t know.  I guess Cole Haan.  I have multiple pairs of driving loafers from there.

Eric:  No particular brand but I like this purple and black checkered shirt. I also like jumpers and vests. And I wear my pants inside my trousers.

Cezar:  May I say coffee?  No, I shouldn’t.  Perhaps the All-Over Wash by Jack Black.  Or maybe dental floss.  That is really important.

Eric:  I don’t use beauty products.

Cezar:  I have maybe five Timex watches.  Lawrence and I both have Timex T5K253 Men’s IRONMAN 150-Lap TAP Screen.  I’d eventually like to have a Panerai Luminor.

Eric:  I currently wear an automatic watch by Seiko, a gift from my father from high school.

Cezar:  I like Jeeps, Wranglers in particular.  But Wrangler open tops are not great when you have band equipment.  I also like the Land Rover Defender.

Michael:  Lawrence, don’t tell anyone that I still drive a car from 1997.

Lawrence: Michael’s 1997 Subaru Outback. He’s been kind enough to pick Eric and me up and drive us to practice. It’s great because Michael’s my main source of music, which he plays for us in his car. I’d be lost without those 45 minutes. 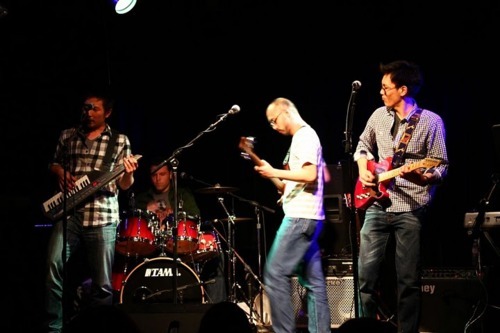 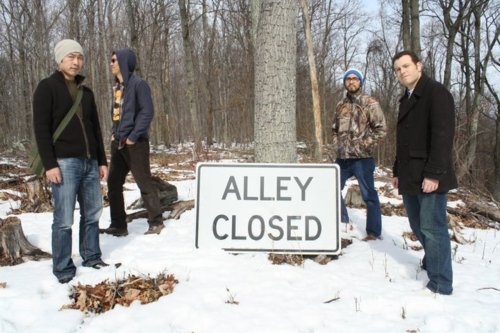 Cool shot of the band 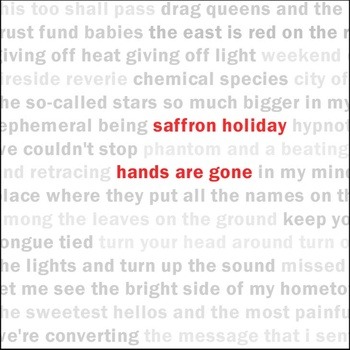